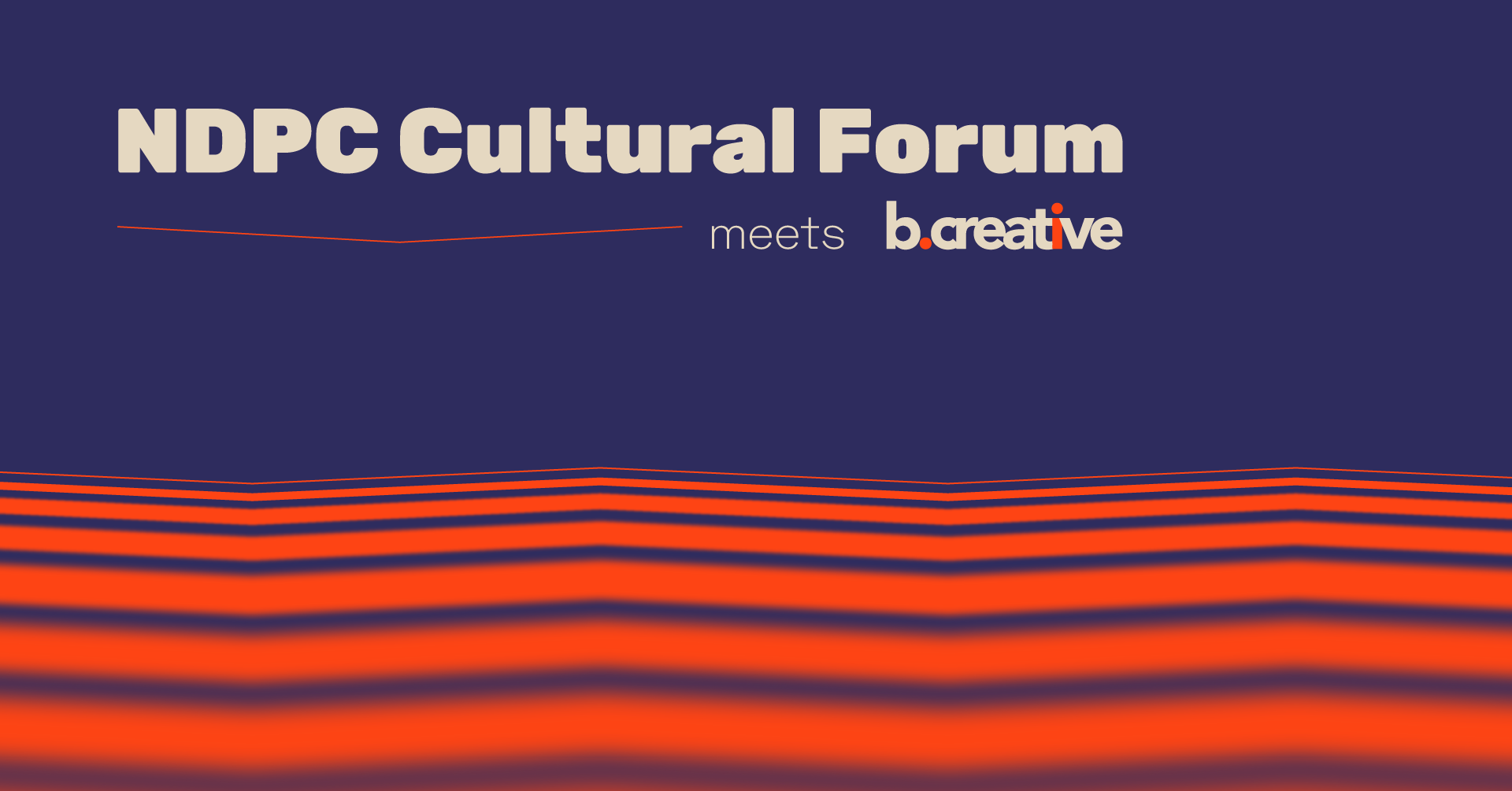 On 10 and 11 December, the NDPC Cultural Forum meets b.creative was held online and onsite in Saint-Petersburg. The Forum “Reaching New Horizons: Creative Entrepreneurship and Museums” ended with loads of new ideas generated, versatile experiences shared and meaningful connections made across the Northern Dimension region, Europe and beyond. It was an opportunity to voice the central role of culture and creative industries in triggering  positive change across our communities and tackling today’s challenges, as well as raise awareness about combining creativity, storytelling and possibilities brought by new technologies in revolutionizing museum offer.

On the first day of the Forum, a keynote speech was given by Jon Stever from Rwanda, Co-Founder and Managing Director at Innovation for Policy Foundation. Being an artist, community builder, entrepreneur and trainer in the innovation ecosystem, Jon shared his experience on working with governments, the private sector, civil society and international organizations and revealed how a local cultural organisation can foster policy change at the governmental level and motivate local communities to engage in social conversation that has facilitated democratic innovation.

The discussion “Cultural and creative sectors as change-makers for 21st century challenges” was moderated by Arthur Le Gall, Treasurer and Director of KEA, and gathered experts in cultural and creative industries and museum field: Elena Zelentsova, Vice President, the Director of Urban Environment Development, Skolkovo Foundation, Ineta Zelča-Sīmansone, Museologist, Head of Creative Museum think-tank, Tere Badia, Secretary General of Culture Action Europe, and Jani Joenniemi, Founder of EARS. The panellists shared their insights on how artists and creative communities have risen to provide input to global and local societal challenges, especially during COVID-19 pandemic, but not exclusively, and how the new situation has opened the national borders to internationalisation. It is clear that new conditions set new standards to international networking and interaction with the public in the cultural sector. This has fertilised the ground to digital development in all sectors and a need for cross-disciplinary cooperation, as well as for the higher cultural presence in the public sector. The panellists stressed the need for museums to think about their digitization strategies, including opening their collections to designers and other creative industries’ representatives and cooperating with them in creation of new digital cultural products. At the same time, it was noted that digitisation is a tool, not a goal, while new digital didactics need to be sought to create interesting content for people to invest their time and attention in a meaningful way, as well as to bring people together for participation and dialogue, not only a one-way relationship. The panellists also agreed that yearning for more physical experiences has not disappeared, although the difficult times of restrictions are present everywhere. Cultural and creative industries should be in charge to help people get through tough times and situations and reinvent themselves.

The discussion was followed by two workshops, that made it possible for attendees to gain more knowledge how to  strengthen communication between local communities and museums (a workshop moderated by Clementine Daubeuf, Associate Director of KEA and Founder of b.creative network) and build local creative entrepreneurship communities (a workshop moderated by Külli Hansen, Project manager, Tartu Centre for Creative Industries).

The second day’s focus was on innovating museums with the help of tools and skills possessed by creative industries. It began with an onsite discussion from Saint-Petersburg, which was moderated by Alla Manilova, the State Secretary, Deputy Minister of Culture of the Russian Federation. Interventions about museums and different innovation practices where brought in by Sergey Korneev, Chairman of the Committee for tourism development of Saint-Petersburg, Boris Piotrovsky, First Deputy Chairman of the Committee for Culture of Saint-Petersburg, Elena Kalnitskaya, General Director, Peterhof State Museum-Reserve, Elena Titova, Director of the All-Russian Decorative Art Museum, Arne Langaas, Curator of Falstad Center, Representative of Norwegian Museums Association, Olga Khomova, Director General, Saint-Petersburg State Academic Capella, Riitta Kaivosoja, Director General, Department of Art and Cultural Policy, Ministry of Education and Culture of Finland, Tarja Halonen, Chairperson of the Board of Directors of the Finnish National Gallery, and Sergiu Ardelean, Co-founder and CEO at Artivive.

The Forum was embellished with an inspirational speech “Making your museum digital” by Ott Sarapuu, Partner at exhibition design production company MOTOR, CEO of Proto Invention Factory, who articulated the need for museums to think of communicating messages to the audience in digital ways, and suggested that the right time to act was now. He shared several best practice examples from museums around the world utilizing virtual and augmented reality in creation of new and innovative content in museums. Ott confirmed that combining technology, environment and storytelling is the most crucial, while the focus in innovating a museum should be on picking the story and only then the technology.

The two days of the Forum also gave an opportunity to network with attendees from all around the world in short matchmaking meetings, as well as provided a space to showcase projects, ideas, products and organizations in a special virtual Expo area on the Forum online platform.

The Forum was organized by the Northern Dimension Partnership on Culture, b.creative network and the Ministry of Culture of the Russian Federation. 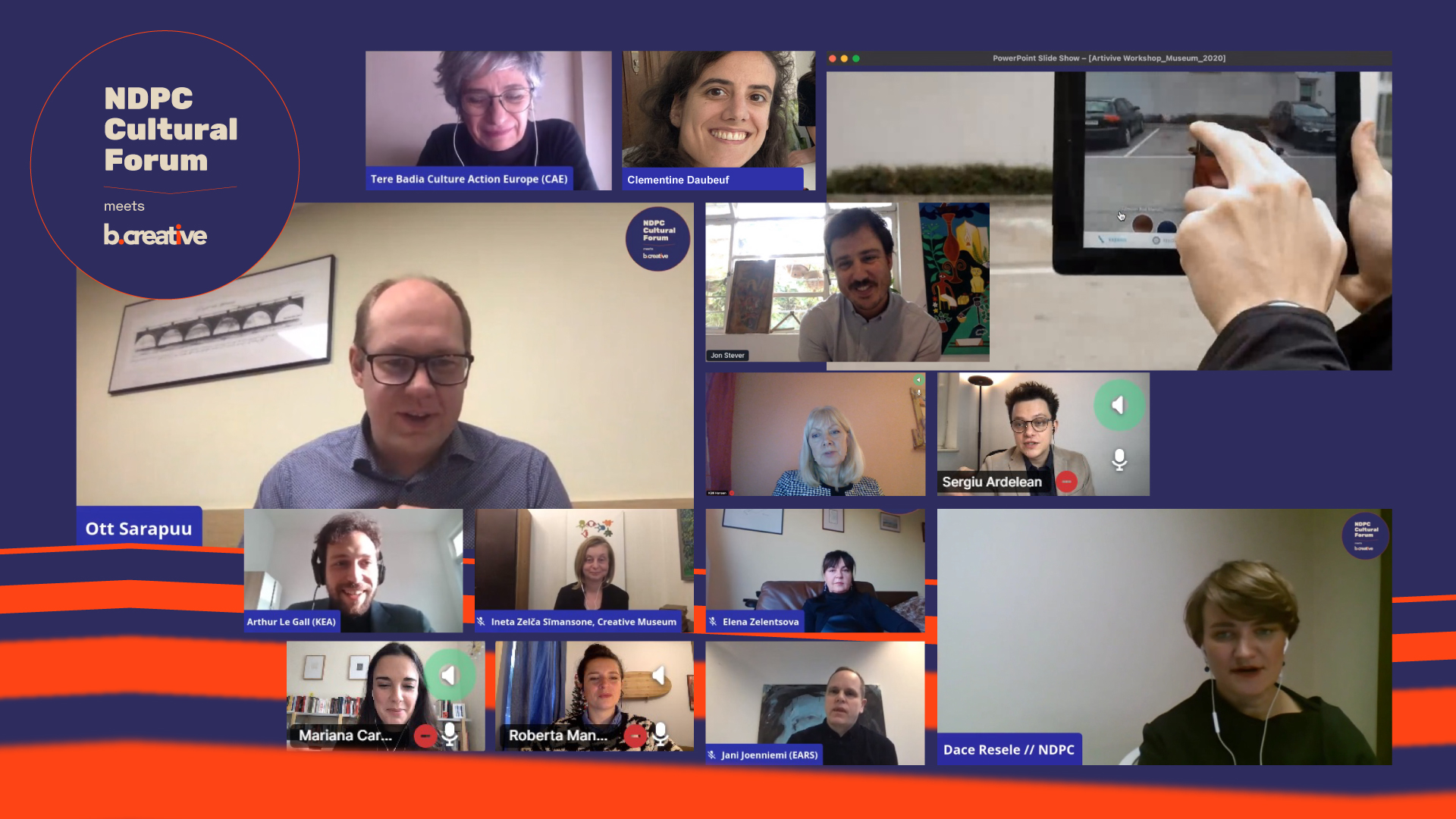 Ministry of Culture of the Russian Federation